Chicago Board of Education proposed a new policy on artwork

Art criticized as racist could be removed from Chicago Public Schools under new policy: ‘The days of painting early white Americans as saviors are over’ 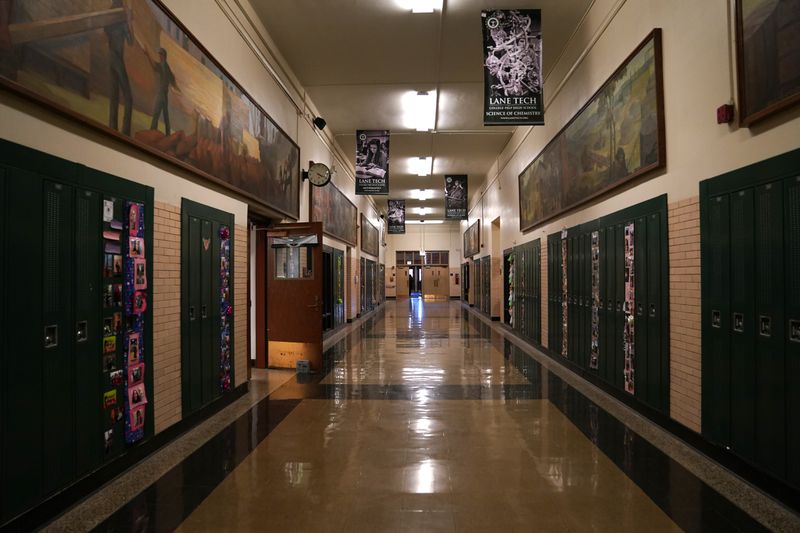 Lane Tech College Prep High School has a collection of dozens of murals painted in the early and mid-20th century. According to the school website, the "nationally recognized collection is valued for its aesthetic qualities, historic importance, and political perspectives. It offers students, teachers, and visitors an exciting visual experience while providing lessons about the art and history of 20th century America." (E. Jason Wambsgans/Chicago Tribune)

When the Chicago Board of Education proposed a new policy on artwork adorning its buildings, people weighed in on a particular set of pieces they want gone: murals at a district office building that depict indigenous people and white settlers.

“Please remove all the artwork in (the Garfield Park offices),” implored one person on a comment forum on the CPS website. “It is insulting and triggers me. ... We need to stop upholding the narrative of European settlers building this country and educating the Native/Indigenous Tribes. We need to tell the truth about this country so our children and families can feel validated and a part of history in a positive way.”

Many commenters were more direct, calling the art racist, dated and offensive.

In one mural in question, Native Americans steer canoes for a white man, who is standing, while one man, wearing a headdress, gestures across the water. 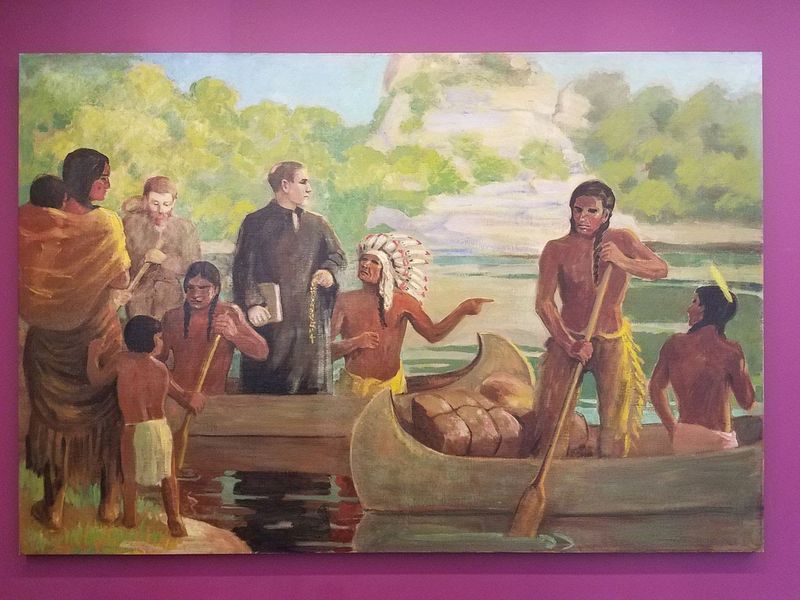 This mural, housed at a CPS office building in Garfield Park, is among those that have caused controversy for what some view as racist and outdated depictions. (Chicago Public Schools)

“Unless CPS plans to show the slaughter of indigenous Americans and white invaders passing out Small Pox infected blankets, enslaved Africans in chains being whipped, raped and sold, then remove it all,” another person wrote. “The days of painting early white Americans as saviors are over. Tell the whole truth.”

The Board of Education voted Wednesday to adopt the new policy for acquiring, maintaining and potentially removing art. In a similar vein, several audience members at the board meeting spoke in favor of ending the observance of Columbus Day in CPS in favor of Indigenous Peoples Day. The district has been using both labels for the October holiday but also voted Wednesday, though with two dissenters, to change the holiday to Indigenous Peoples Day. For more on the vote to end the Columbus Day observance, click here.

The murals have prompted debate about how certain art should be used and whether the answer is different inside a public school than in a museum or on the side of a building — or, in this particular case, in a building that houses CPS’ American Indian Education Program.

When students or families visit the building, some see the artwork and raise questions, said the program’s manager, Lisa Bernal. The American Indian Education Program moved into the Garfield Park building a couple of years ago, and at first she tried to tolerate the art that offended her, but it’s hard to see it every day, she said. She is frustrated by false portrayals of her community’s relationships with “colonizers, or any non-natives.”

“It’s kind of hard to consider this artwork and how its supposed to show maybe some honor, it’s supposed to show some type of a positive reflection of the first contact with indigenous people here, but when you go beyond just that first contact, then you have where we are constantly being demeaned," Bernal said.

Many of the murals in CPS and in other local public buildings that have created controversy in recent years were painted during the 1930s and ’40s, often through President Franklin D. Roosevelt’s Works Progress Administration or other New Deal programs. Some preservationists have argued that such art should be retained for its historic and aesthetic value, and as useful lessons in how attitudes and depictions have changed, with explanations of why the work is now viewed differently.
With newer art at CPS schools, officials have been intentional about reflecting the district’s diverse student body. A mural at the new Englewood STEM High School, for example, combines words community members used to describe Englewood with STEM symbols and traditional West African art patterns. 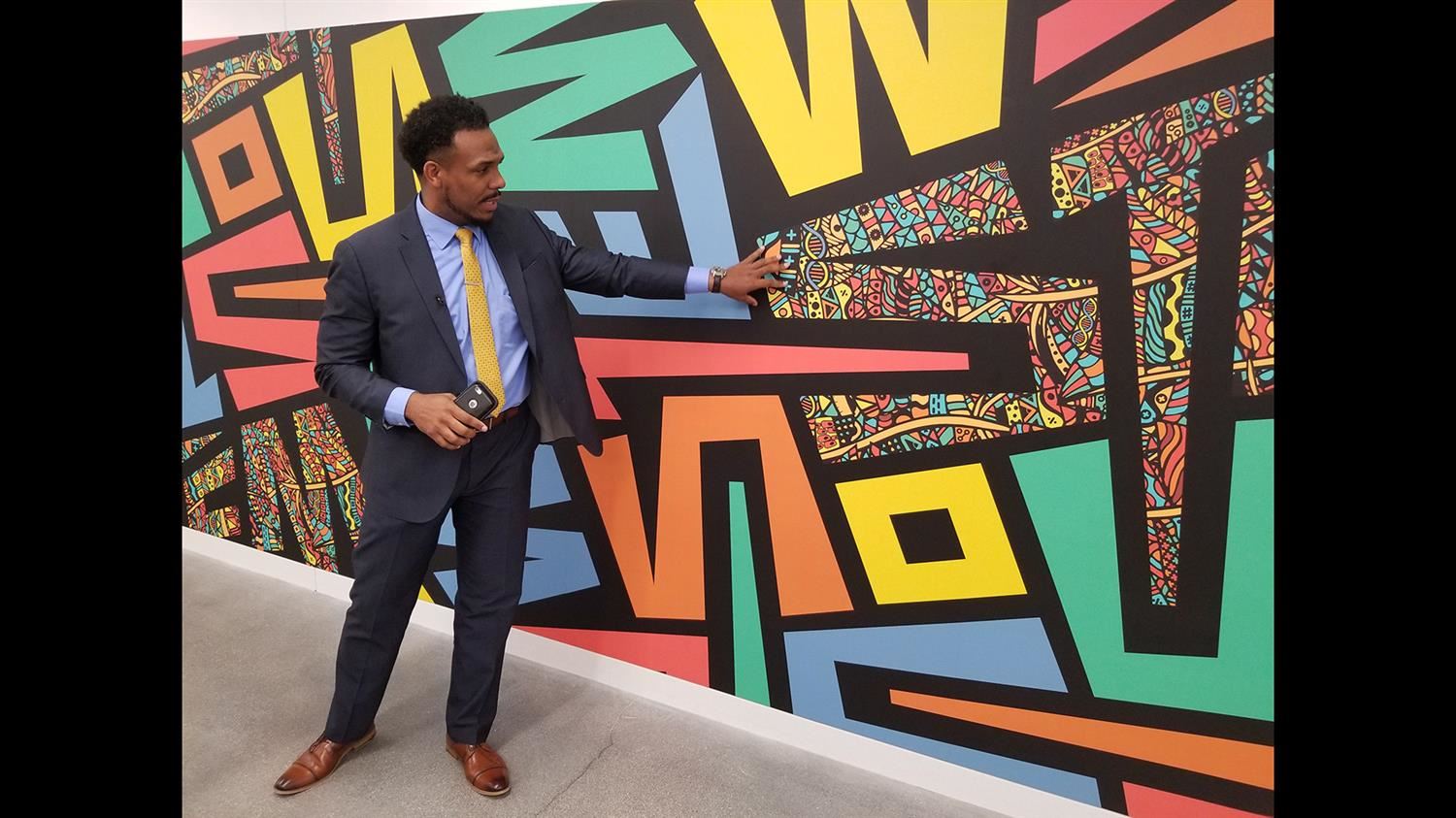 A CPS spokeswoman said the district is committed to fostering a supportive environment that embraces the city’s diversity.

CPS collected public feedback "on a comprehensive new policy that will ensure communities have a voice in determining the works of art that are displayed in their schools and offices,” spokeswoman Emily Bolton said in an email.

The old policy for art acquisition, ownership, conservation and maintenance was established in 2000. Bolton said it doesn’t address equity in a meaningful way, which is a key value and priority for the district.

The new policy includes the creation of a steering committee to “evaluate concerns raised about specific works of art to ensure equity and cultural responsiveness.” The committee will make recommendations to the board on how to address any concerns or complaints.

“The district recognizes that some works of art in schools do not reflect the district’s values of diversity and inclusion," a district statement said.

Recommendations could include removing art, adding contextual information or commissioning new “culturally responsive” art to hang alongside the existing work.

“There are so many things, from the very practical to the ethical, that I think they are taking into account,” said Jacqueline Terrassa, who works in museum education at the Art Institute of Chicago.

Terrassa said CPS arts education office asked the Art Institute to help bring more perspectives and knowledge to the process of drafting a new policy. “Policies can either create or limit access, opportunities for fair or unfair representation or engagement, and I appreciate that they are thinking about those questions.”

Terrassa’s recommendations included making a clear statement about the purpose of the collection, and including artists and CPS teachers on the committee.

In line with the new policy, the district plans to update its artwork inventory. As dozens of schools have closed in recent years, some of the art decorating their walls has been moved to other CPS buildings or put in storage. One mural in question at the West Garfield Park offices was once housed at Trumbull Elementary.

The school district has the largest remaining collection in the U.S. of murals painted between 1904 and 1943, according to the Chicago Conservation Center. The center has helped CPS with the preservation of 440 such murals, and dozens of works at Lane Tech High School are among those documented in a 2002 book by Heather Becker, “Art of the People: The Rediscovery and Preservation of Progressive and WPA-era Murals in Chicago Public Schools.” 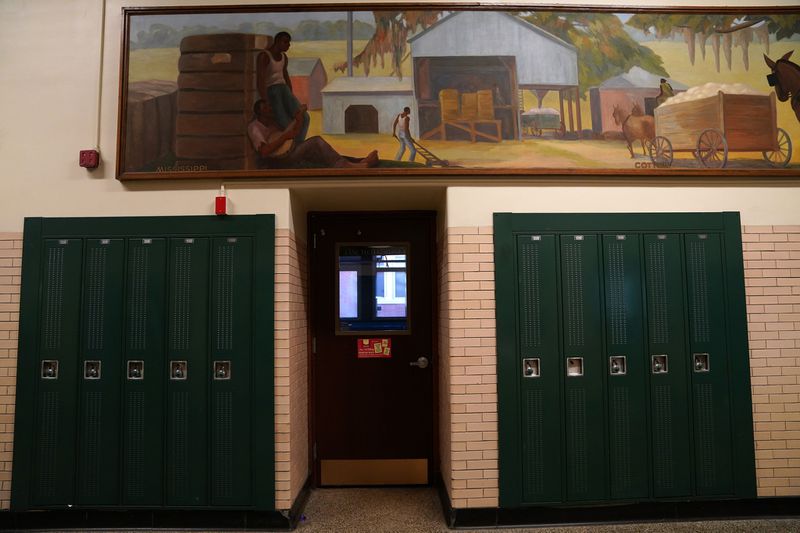 Lane Tech College Prep High School has a collection of dozens of murals painted in the early and mid-20th century. According to the school website, the "nationally recognized collection is valued for its aesthetic qualities, historic importance, and political perspectives. It offers students, teachers, and visitors an exciting visual experience while providing lessons about the art and history of 20th century America." (E. Jason Wambsgans / Chicago Tribune)

Complicating matters, though, the Board of Education doesn’t own WPA art in its collection, and CPS cannot legally move or remove these pieces unilaterally, according to the district. Works created through the Works Progress Administration, whose name was later changed to the Work Projects Administration, can only be moved or removed in consultation with the federal government, which the district said it intends to do based on guidance by the steering committee.

Sarah Dennis, a CPS alumna who is now a social justice advocate, consultant and an adjunct professor of education, suggested that problematic art could still be blocked from view if not removed. She also noted that some WPA-era murals depict only white children, sending the wrong message about who belongs in the school.

Though most criticism has been aimed at the Garfield Park office murals, Dennis said they’re not the only ones that raise questions, recalling a field trip she took her education students on to Bateman Elementary, where they saw a mural depicting characters from children’s literature. She questioned some of the portrayals, such as a boy in a headdress and others depicted in head coverings.

“We went out into the hallway and stared at it,” Dennis said. “I asked them, ‘What do you see? What kind of message does it send to the children who attend here, about who is important?’”